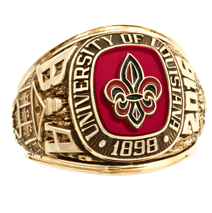 Design of the class ring at the University of Louisiana at Lafayette is as extensive in symbolism as it is in tradition. The Fleur-de-lis on top of the ring symbolizes the university’s primary logo. The red stone surrounding the fleur-de-lis represents the university’s primary color, vermilion. As a naturally occurring pigment, vermilion has been used around the world for thousands of years. It is regarded as the color of life and is associated with eternity. Beneath the stone, the 1898 refers to the founding date of the university. More than 105,000 students have graduated from the university since it was founded. 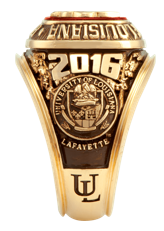 One side of the ring depicts the student’s class year. Surrounding the year is a grove of cypress trees. These trees represent Cypress Lake, a unique feature of UL’s campus. Cypress trees connect the university to the world since they exist on all habitable continents. Beneath the year and cypress trees is the university seal. The university’s crest represents the diverse culture and heritage of the university. The seal incorporates the Acadian and Creole flags, a shield, a pelican, oak leaves, and the Latin motto: bravely, happily, faithfully. Under the seal is the interlocked UL, which displays the initials of the university.

The other side of the ring depicts the student’s major. Surrounding the major are oak trees. In 1900, the university’s first president and founder of the Live Oak Society, Dr. Edwin L. Stephens, planted oak trees on campus. Many still stand today and are symbolic of the university’s growth, strength and endurance. Beneath the major and trees is Martin Hall. This hall is the main administrative building on campus and is named for State Senator Robert Martin, who helped establish the university. Under Martin Hall is Ragin’ Cajuns®️, which was twice voted as the top nickname in the nation and is as unique as our culture. Beneath the nickname are four bricks which represent the university’s evolution, which is reflected in four historic name changes. They also signify the Walk of Honor, which is paved with bricks bearing the names of all graduates.

Inside of each ring is the inscription “Heart and Hand” which are the final three words of the university’s alma mater.

Want to start saving for your ring now? Learn how!

This kick-off event is part of the ring tradition on campus. At the Ring Release, the rings will be presented and placed into an air-tight box which is then placed into a customized UL Lafayette pirogue. The University ROTC will launch the pirogue into Cypress Lake where the Louisiana Rings will rest in the swamp overnight guarded by the ROTC, turtles, and alligators.

UL Lafayette’s Ring Ceremony celebrates the bond between all UL Lafayette graduates. Students and alumni are presented with class rings by President Savoie during the ceremony.