With its gorgeous oak trees, vast greenery, and unique architecture — the Alumni

Read More ➝
Alumni Erin and Trent Bolfer attended the University of Louisiana at Lafayette to pursue their passions. Little did they know that they would also end up finding love along the way as well.
Erin’s family had a history of attending the University, so she always knew she would be a Ragin’ Cajun. “I’m a third-generation alum, and my parents met at UL Lafayette as well,” Erin said. Trent was a first-generation college student, so even though he was the first in his family to attend the University, he felt this was a place he was meant to be.
When Erin started college, she had a friend invite her to join an organization on campus — the Association of Future Alumni. Erin thought this would be a great way to meet people and get involved with the University. Since this organization partnered with the Alumni Association, all their meetings were held at the Alumni Center. When she walked into the Alumni Center for her first meeting with the group, she locked eyes with her future husband — Trent.
After these two lovebirds met, they slowly started to get to know each other and eventually began dating. “We would make the long walks to Griffin Hall together, and that’s where our love blossomed,” Trent said. Some of their favorite memories as students included participating in Homecoming Week activities and attending basketball games together. “The Cajundome would get so packed, so we had to get there early to get good seats in the student section,” Erin said.
After the couple graduated from the University, they decided to stay in the Lafayette area to start their careers. Trent knew it was also time for them to take the next step in their relationship.
One day after they both finished work, Trent told Erin they needed to run an errand together. They got into their car, and Trent drove them to the place where they first met – the Alumni Center. From there, Trent proposed and asked Erin to spend the rest of their lives together. “It couldn’t have been any more perfect for me. That was where we met and shared a lot of memories together,” Erin said. 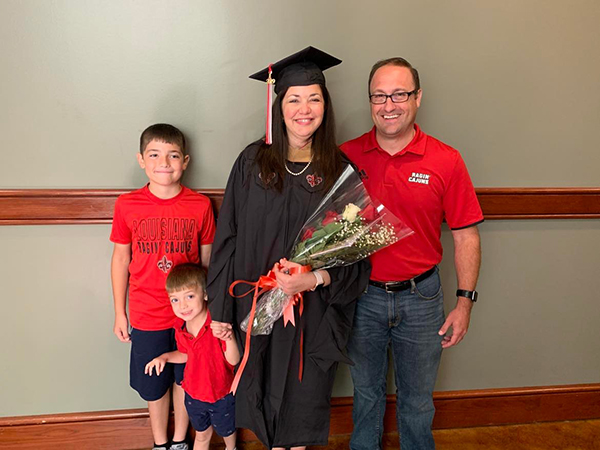 After almost 19 years of marriage, the couple is still heavily involved with the University and the Alumni Association. Both went on to get their MBAs from UL Lafayette and got to share that special moment with their children. “I was so excited that our kids got to see their mom graduate. They got to see their mom get her diploma,” Trent said.
The Bolfers plan to continue to give back and stay involved with the place that gave so much to them. Ultimately, they’re most grateful that the University brought them together to create a beautiful Ragin’ Cajuns romance.
Main Photo Caption: (Left) Erin and Trent as students at UL Lafayette (Right) Years later, the Bolfers attend a Louisiana Football game as alumni. (Submitted) Bottom Photo: The Bolfer family attend Erin's commencement ceremony for her MBA (Submitted)
SHARE THIS |