Ernest J. Gaines, whose considerable imprint on American letters and culture rests on his examinations of race, class and poverty, will be depicted on a postage stamp to be issued in January.

The internationally acclaimed author, who died in November 2019 at age 86, was UL Lafayette writer-in-residence emeritus; he taught creative writing at the University from 1983 until his retirement in 2010.

The stamp, which the United States Postal Service announced today, will be the 46th in its Black Heritage series; it will feature an oil painting based on a photograph that portrays a stoic, poised Gaines wearing his trademark beret.

“Dr. Gaines’ stamp offers an impressive representation of the man I knew and admired, and it reminds me of the immeasurable grace, strength and character he displayed throughout his life and through his words,” said Dr. Joseph Savoie, UL Lafayette president.

“More importantly, it acknowledges and affirms his belief in the inherent commonality of people and his unflinching courage in reminding us of the need to continually address some of the darkest chapters in our collective past,” Savoie added.

Gaines’ legacy and influence was built on a literary voice – an understated yet resonant voice – that amplified the struggles of the oppressed and jostled the conscience of a nation. “I think a scream can reach ten times as many people in a hurry, as a book can. But I hope my books will be around for a while. When I’m angry I sit down and try to write the perfect paragraph, the perfect sentence. That’s how I strike back,” he was once quoted as saying.

Gaines hit his mark many times during a career that began in 1964 with the publication of “Catherine Carmier.” Seven more novels and two collections of stories followed. In 2013, Gaines received a National Medal of Arts – the highest award given to artists by the U.S. government.

Gaines, as The New York Times explained in its obituary for him, told “of the inner struggle for dignity among Southern black people before the civil rights era” and “captured the lives and strivings of those he had grown up with in a time of limited opportunities and oppressive racism.”

Gaines was born in 1933 on River Lake Plantation in Oscar, Louisiana, in Pointe Coupee Parish, to parents who worked as sharecroppers. He grew up in Cherie Quarters, the plantation’s former slave quarters. Gaines moved to California as a teenager and studied and taught at Stanford University before returning to Louisiana. His fiction, however, remained rooted to the place and people of his childhood – and to his ancestors.

The book that earned widespread notice for Gaines, “The Autobiography of Miss Jane Pittman,” is a first-person narrative of a fictional 110-year-old woman born into slavery. Published in 1971, the novel’s inspiration was Augusteen Jefferson, Gaines’ disabled aunt who raised him.

His other most notable book, “A Lesson Before Dying,” revolves around the story of an illiterate man wrongfully condemned to death. Published in 1993, it earned a National Book Critics Circle Award, a Pulitzer Prize nomination, and was selected for Oprah Winfrey’s popular book club.

All told, Gaines’ deftly rendered novels, which have drawn comparisons to Faulkner and Dickens, have been published in 19 languages. It’s the sort of widespread appeal that can be traced to his ability to “prompt conversations about humanity,” said UL Lafayette’s Cheylon Woods.

Woods is an associate professor who directs the University’s Ernest J. Gaines Center, which the writer worked to establish following his retirement. It is an international center for scholarship on Gaines and his fiction that is housed in Edith Garland Dupré Library.

“He showed the world that the lives and words of marginalized and obscured quarter communities had power and impact beyond the plantation,” she added.

Image: Ernest J. Gaines will be depicted on a U.S. Postage stamp to be issued in January. The internationally acclaimed author, who died in November 2019 at age 86, was UL Lafayette writer-in-residence emeritus. Credit: The stamp features an oil painting of Gaines, based on a 2001 photograph. Mike Ryan designed the stamp with art by Robert Peterson. Greg Breeding served as art director. 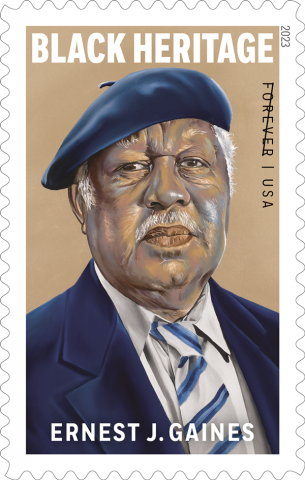