Changes to come for Alumni Tailgating

Fall is approaching, and so is the upcoming Louisiana football season.

Two UL Lafayette alumni are making their marks in the Big Apple.

While many people dream of competing in the Olympics, only a few get the chance to see that dream turn into a reality. Current UL Lafayette student, Nicole Ahsinger, is about to accomplish her Olympic dream for the second time at the Tokyo Olympics.

Ahsinger will represent Team USA in the women's trampoline competition. Previously, she competed in the 2016 Rio Olympics at just 18 years old—making her the youngest USA trampolinist in Olympic history. Five years later, Ahsinger is ready to represent her country again on the Olympic stage and will be the first back-to-back female trampolinist for the USA since Jennifer Parilla in 2000 and 2004.

While competing in St. Louis at the 2021 USA Gymnastics Championships in June, Ahsinger secured her second trip to the Olympics and won the women's trampoline title. Ahsinger’s other accolades include being a 2014 Youth Olympian and placing 15th in the 2016 Rio Olympics.

Originally from San Diego, Ahsinger's family put her in gymnastics at just three years old. She started at a small gym that offered several different gymnastic disciplines, including trampoline. "I fell in love with it," said Ahsinger. When she found out that trampoline was an Olympic sport, she began intensifying her training to accomplish her new goal—competing on the Olympic stage.

After years of training in California, Dmitri Poliaroush recruited Ahsinger to train at Trampoline and Tumbling Express in Lafayette, Louisiana. Poliaroush had a reputation for producing Olympic trampolinists, so Ahsinger jumped on the opportunity to work with him and moved her life to Acadiana to pursue an Olympic career.

Moving across the country came with its obstacles, but Ahsinger loved how everyone in Lafayette welcomed her into the community. "What I love about Lafayette is how nice the people are," said Ahsinger. After competing in her first Olympic games in 2016, she decided to start her college career at UL Lafayette while simultaneously continuing her trampoline training.

A typical college experience was slightly tricky for Ahsinger since her training took up so much of her time. However, she still got to enjoy some of UL Lafayette's best traditions, such as attending football games and participating in Homecoming Week. After she graduates, Ahsinger plans to pursue a career in sports media, working in broadcasting or sports commentating. "I can see myself doing anything with sports," said Ahsinger. 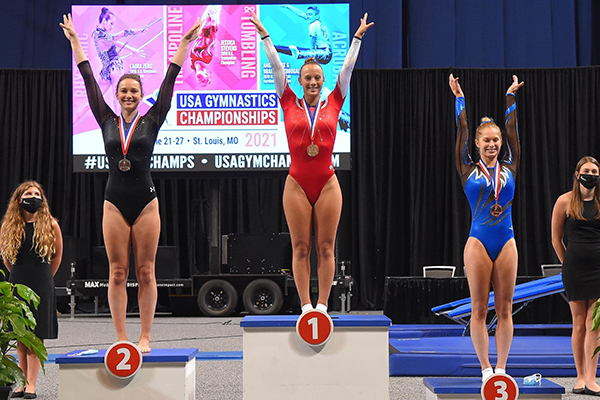 With the Tokyo Olympics finally in reach, Ahsinger is excited to show off her trampoline talent to the world. Most importantly, she is proud of herself for persevering through obstacles and achieving her lifelong goal. "Because of the support of my friends and family, I never gave up on my dreams," said Ahsinger.

Throughout her life, Ahsinger has always pushed herself to be the best that she can be. She's hopeful that she'll continue to inspire others after her Olympic career and show them that if you believe in yourself, your wildest dreams can come true.