Changes to come for Alumni Tailgating

Fall is approaching, and so is the upcoming Louisiana football season.

Two UL Lafayette alumni are making their marks in the Big Apple.

Alumnus Jerry Flake ’70 is a two-time All-American basketball player who played for the Louisiana Ragin’ Cajuns Men’s Basketball team from 1965-1969. At age 73, Flake is just as good at shooting hoops as he was years ago — and the entire world now knows about his skills thanks to the popular social media platform, TikTok. Flake recently had a video of himself shooting basketballs with his grandson go viral on the platform. How many video views does that mean exactly? Over 540,000 people watched Flake effortlessly nail basket after basket in the short video clip while proudly sporting a hat representing his alma mater. 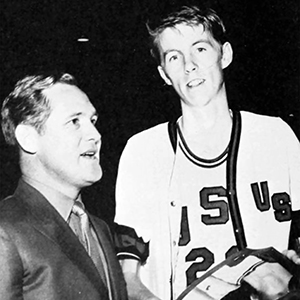 Flake’s grandson was visiting him in Florida when he suggested to his grandpa that they should shoot some basketballs for fun. Flake thought it was a great idea. “I tried a couple of shots I hadn’t hit in a while, and I actually hit them,” said Flake. His grandson let him know that he was filming all of the shots for TikTok, but Flake had no clue the amount of traffic his video would receive. After his video started gaining traction, his grandson filled him in on all of the numbers and statistics. People worldwide were leaving messages, sharing his video, and congratulating Flake on his continued basketball success.

Flake, originally from Indiana, came to the then University of Southwestern Louisiana on a full basketball scholarship. Even though it was a bit of a culture shock moving to south Louisiana, Flake is grateful for his experiences at the University. “I made a lot of good friends, and I met my wife here,” said Flake. Throughout his time on the basketball team, Flake received tons of accolades, including finishing his career as the school’s all-time leading scorer with 2,058 points. In 2013, he had his jersey retired and was honored at a basketball game for his achievements. “I was completely shocked,” said Flake.

After his basketball career came to an end, Flake became an English teacher for 33 years. He has three children and nine grandchildren who are all incredibly proud of him and his accomplishments. As Flake reflects on his life, he is extremely grateful for his time at the University and the people who impacted him. “The University gave me the opportunity to get an education, and that was the basis for the rest of my journey,” said Flake. 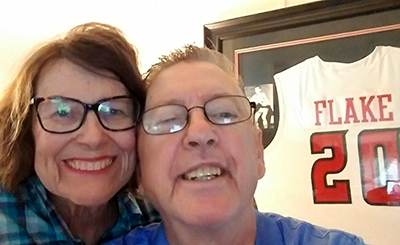 Throughout his life, Flake has gone from a member of the Louisiana Athletics Hall of Fame to a viral TikTok sensation. His video was able to reach thousands of people around the world. But the best part about his video was that a new generation now knows Jerry Flake — a loving husband, father, grandpa, teacher, basketball player, and proud Ragin’ Cajun.

My grandpa is 73, he just lost his kidney in February & his wife last May. We hooped today and just want him to feel special. Can we run this up?##fyp