Music has always been a core component of alumnus Gerald Guilbeaux’s life.

Being an entrepreneur takes determination, grit, and a lot of hard work.

Since the launch of Cajun Compass, UL Lafayette's premier networking an

Read More ➝
What do the words “hustle up” and “bustle up” have in common? They are two iconic phrases from the Ragin’ Cajuns Fight Song. Initially created in 1950, the Ragin’ Cajuns Fight Song has been around for 69 years. Since its origination, the song has evolved with the name changes of the University. However, the recognizable tune and most of the lyrics have remained faithful to the original version. The fight song is usually played at all University sporting events and has become a classic part of UL Lafayette history. But who is the person that created this famous song? That would be Hilma LaBauve Levis.
Levis ’53 was born in New Orleans but was raised mostly in the Lafayette area. Growing up, she was very close to her brother, Jack, who was passionate about music. After Jack graduated from then Southwestern Louisiana Institute, he had a short stint in the army before returning home to Lafayette to pursue a career in music. When Jack returned home, their father became ill and suddenly passed away. “It was devastating for all of us,” said Levis. After this turn of events, Jack accepted a teaching position leading a high school band in Northern Louisiana, and he wanted his family to come with him. Their family moved with Jack to support him with his new job. While there, Jack recruited Levis to play in the high school band because he didn’t have enough people to play during football games. Levis was assigned to play the bells and made sure to practice them at home, so she was ready for game day. As she practiced, she created a tune that she could not seem to get out of her head. “Little did I know that this [specific] tune would [eventually become] the melody for the fight song,” said Levis. 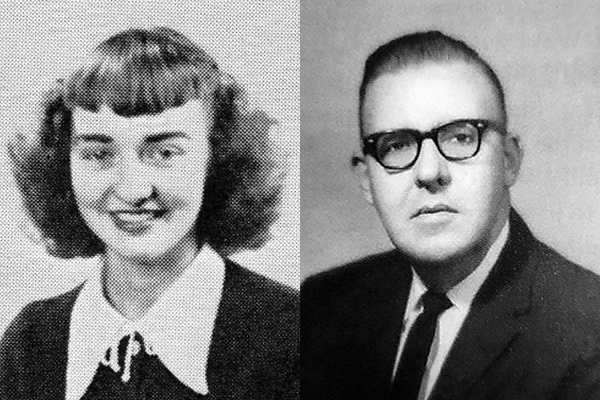 Fast forward a few years and Levis was now a student attending the University. She was heavily involved on campus in organizations like the Red Jackets and The Vermilion newspaper. The University was celebrating its 50th anniversary and was holding a contest for students to create a fight song for the institution. When Levis heard about the contest, she immediately thought of her tune that she created years ago. Her brother was now teaching music at the University, so she knew that he could help her transform her tune into a song. “He said that it sounded pretty good,” said Levis. Jack was able to take her tune and arrange it into a full orchestration. The two quickly got the song finished and submitted it into the contest.
A few days later, Levis received a call saying that her song was a finalist in the competition. She was advised that she would have a better chance of winning if her song had words. Levis quickly turned to songbooks, specifically war songs, for inspiration for her lyrics. “I figured they would be fighting on the football field,” said Levis. After completing the fight song, she submitted it back into the competition. All finalists’ songs had the opportunity to be played in front of the student body at an assembly where the students voted on the song that they liked the best. After all of the songs were played, an announcement declared Levis the winner! From that moment on, Levis’s song would become embedded in the history and legacy of the University.
Even though Levis doesn’t currently reside in Lafayette, she still loves to visit during Homecoming week to watch the annual parade with her Red Jackets alumni. Whenever she comes to town, people usually want to get a picture with her once they realize that she wrote the song that they care about so deeply. It’s clear that Levis’s song made a significant impact on the Ragin’ Cajun community and will continue to ignite other Ragin’ Cajuns for generations to come.
Photo: (1) Hilma LaBauve Levis takes a photo with University President, Dr. Joseph Savoie, before the Homecoming Parade. (2) Hilma LaBauve Levis, left, and her brother Jack LaBauve, right.
SHARE THIS |