Most people might think of fishing as a hobby or a past time; however, Zach Dubois has turned one of his favorite activities into a thriving business.

Dubois '14 is the founder and CEO of Cajun Lures, a company that manufactures and sells specialty fishing lures with a Cajun twist. Established in 2015, Cajun Lures has grown exponentially in size over its four years of operation. Currently, you can find Cajun Lures in over 50 stores throughout Louisiana and Texas. Through online orders, Dubois has been able to sell lures to 48 states throughout the country.

Looking back on his journey to success, Dubois never imagined that his time at UL Lafayette would lead him to become an entrepreneur.

Originally from Kaplan, Dubois always knew that UL Lafayette was where he would attend college.

"I didn't plan to go anywhere else," said Dubois. Once on campus, he decided to study industrial design and immediately got involved with an honors organization within his major. He also decided to join the Ragin' Cajuns Bass Fishing Team.

Growing up, Dubois loved to fish with his family and friends. As a member of the bass fishing team, he could continue his passion for fishing while representing the Ragin' Cajuns at the same time.

"[The bass fishing team] is really where I got into competitive fishing," said Dubois. During his time on the team, they attended three national championships in a row and competed in several local and regional tournaments. Being on the team also got him interested in a unique aspect of the industry: fishing lures.

The journey to the establishment of Cajun Lures started at the end of Dubois's collegiate career. While in school, Dubois would experiment with creating his fishing lures for fun.

"I just wanted to see if I could make a bait," said Dubois. He also had the opportunity to be a part of a business accelerator program where he learned valuable skills about running your own company.

Even though Dubois had always thought about owning his own business, he ended up accepting a full-time job in the industrial design field after graduation. While working, he couldn't quite get the idea of creating fishing baits out of his head. So, Dubois began working full-time by day and making fishing lures by night. Slowly but surely, his fishing bait business began to take off, and Cajun Lures was born.

As Dubois was starting to get Cajun Lures off its feet, the unthinkable happened. He was laid off from his full-time job. Instead of sulking in his sorrow, Dubois pulled himself up and decided to pursue Cajun Lures as a career instead of a side business.

"I just woke up the next morning, went in the shop, and started making some bait," said Dubois. 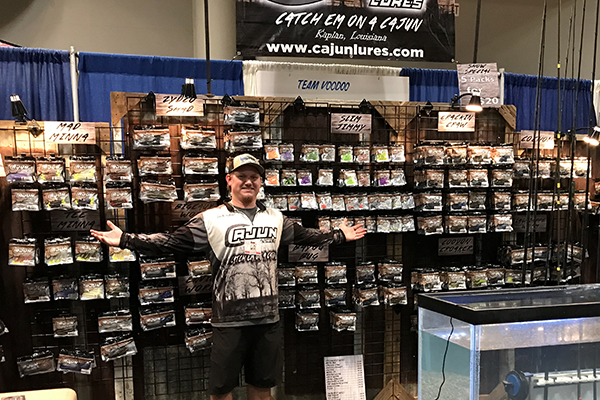 Cajun Lures has become a thriving business since Dubois decided to start running it full-time. What sets Cajun Lures apart from its competitors is that Dubois likes to incorporate his culture into his products.

"I had the idea of using fishing lures to promote Cajun heritage," said Dubois. Staying true to his initial idea, Dubois gives each of his lures an original Cajun name such as Bayou Bug or PoBoy Grub to name a few.

As his business continues to grow, Dubois hopes that he can expand his operations to match his high demand. He also hopes that he can widen his company's offerings and turn Cajun Lures into a complete fishing brand.

Regardless of which direction his company will go, Dubois remains grateful for the journey that led him to become an entrepreneur. He encourages others also to follow their paths in life.

"I believe everything happens for a reason," said Dubois. His success proves that with a little hard work and Ragin' Cajun tenacity, a small idea can turn into the catch of a lifetime.

Photo: (1) Dubois shows off his fishing skills and creations with a bass caught using one of his Cajun Lures. (2) Dubois poses infront of his inventory of Cajun Lures.