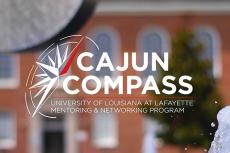 Join the university's new professional networking and mentorship platform and discover the power of your UL Lafayette network.

Alumnus and wife give back through candle company

Sometimes your life may take a turn that you never expected.

Over the last several months, the COVID-19 pandemic has completely changed how we interact with one another.

For many people, making a school lunch is an ordinary task. For Chris Yandle, it was an opportunity to connect with his daughter and it eventually led to him writing his first book. Yandle ’04 never dreamed that he would be a published author when he was a student. Originally from Houma, Louisiana, Yandle transferred to the University of Louisiana at Lafayette because of the public relations program. While on campus, he was heavily involved with the athletics department as well as several other communication organizations. Yandle embraced every moment of his undergraduate career including the unexpected ones, such as meeting his future wife on a blind date.

After graduation, Yandle’s professional career flourished. He attended graduate school at Marshall University and eventually began working full-time in collegiate athletic communications departments across the country. Yandle worked at schools such as UL Lafayette, Baylor University, the University of Miami, and Georgia Tech. After years of traveling, Yandle and his wife made the decision to move back to Louisiana where he now works as a communications specialist for St. Tammany Parish Public Schools.

Even though his family was settled in one place, moving consistently for several years meant that Yandle’s daughter was constantly changing schools. “When Addison started fourth grade, it would be her fourth school in five years,” said Yandle. As the beginning of the school year approached, he could tell that it was the first time his daughter felt nervous about her new start. In an effort to try and help ease her transition, Yandle began writing notes to her every morning. These notes ranged from life advice to school advice and everything in between. He would slip them in her lunchbox or bookbag every morning in hopes of giving her a little piece of encouragement for the day. Yandle also started posting some of his notes on social media using #DadLunchNotes as a way to share his thoughts. Little did he know that these simple notes would lead to an even bigger story ahead.

After Yandle started sharing his notes publicly, his daughter’s fourth grade teacher and principal gave him the idea to turn his morning notes into a novel. Yandle wasn’t sure if a book would be possible initially, but after bouncing the idea off a few friends and colleagues, he decided to give it a try. Once he found an independent publishing house, he then had to fundraise the money for the book himself. After months of writing and editing, Yandle’s book was finally complete. Lucky Enough: A Year of a Dad’s Daily Notes of Encouragement and Life Lessons to His Daughter showcased Yandle’s daily lunchbox notes followed by the intention behind each message. What started as simple words of encouragement had turned into a book of wisdom that parents across the country could now read to their children. Yandle commemorated this important moment by giving his daughter the very first copy of his book with a special note inside just for her.

Now that Yandle’s book is published, he has time to focus on his family, work, and finishing his Ph.D. in higher education leadership. However, he’s not ruling out possibly writing another book one day. Regardless of where his journey takes him, Yandle is grateful for the opportunity he was given to share his message with others. “Even if my book just helps one parent or one child, then it’s a best seller to me,” said Yandle.

Photo: Yandle and his daughter, Addison.